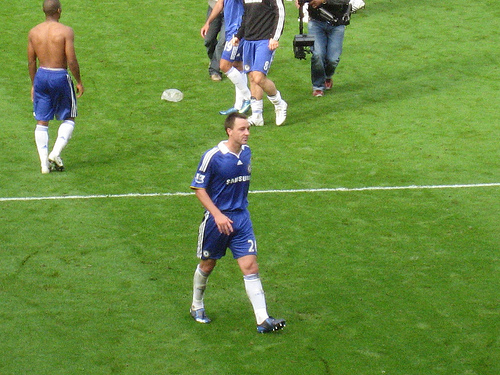 Comments Off on Terry says Chelsea players should ‘man up’

John Terry has backed under-fire manger Carlo Ancelloti and has insisted that his Chelsea team-mates must ‘man up and take responsibility’ if they are going to rescue their season.

Last year’s double winners have seen their hopes of retaining the Premier League and FA Cup dwindling away.
Chelsea were knocked out of the FA Cup on Saturday after a penalty shoot-out defeat to Everton, whilst they trail Manchester United in the league by 12 points.

In a campaign that has spectacularly nosedived in the last three months, Chelsea’s only realistic chance of silverware this season could be the Uefa Champions League and they travel to FC Copenhagen on Tuesday looking for victory in the first leg of the last-16 tie.

Elimination from the Uefa Champions League would see pressure intensify further on Ancelotti but Terry’s public show of support is an apparent plea to the owner Roman Abramovich not to sack the manager in the summer.

“All the players, and everyone involved in the club, have called for stability and we’ve got that with Carlo,” said Terry.
“He’s a great guy, a great manager. The players are 100% behind the manager. He’s got complete confidence in us, and we do with him.

Ancelotti, whose contract runs until the summer of 2012, has been unable to arrest a decline that resulted in five wins in the team’s last 16 matches.

“We know we’ve underachieved, but this team still has its hunger and its desire. We missed out on the Premier League for three years when United won it, but that’s what I lose sleep,  over watching other clubs life trophies”, said Terry.

“Now we have to man up and, as a group of players, take responsibility. It needs to happen now. We’ve had bad times before and we’ve always come out the other end, so we aim to stay together as a team and start winning.”